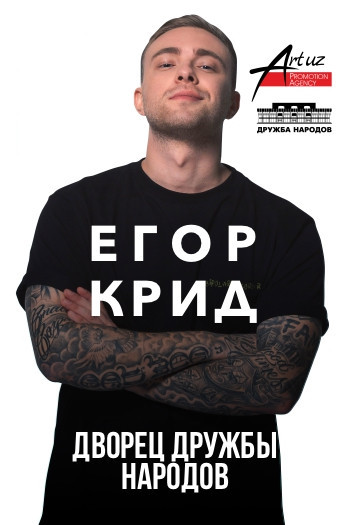 On September 26, 2021, at the Palace of Peoples' Friendship, one of the most popular and sought-after artists in Russia and abroad, Yegor Creed, will perform in Tashkent with a completely new, spectacular show. The audience will enjoy an incredible concert with the performance of the artist's favorite and newest hits. Yegor Creed is the author and performer of his own songs. The brightest representative of the hip-hop scene, a former member of the Black Star label, regularly releases new compositions that become leaders of numerous top - charts. The artist has a huge number of victories and awards in various nominations, including: Artist of the Year, Favorite Singer, Best Performer according to Top Hit Music Awards 2018, Collaboration of the Year according to ZHARA Music Awards. At the MUZ TV 2019 award, the singer received two plates at once for the Best Duet nomination, in which his joint tracks with Philip Kirkorov and Valeria were announced. Among other things, the artist received a statuette for winning the Favorite Artist nomination according to Woman.ru. Yegor Creed collects huge concert halls in whatever country he performs. The young representative of the hip-hop scene is madly loved by his audience, which is growing every day to a staggering number. Ardent admirers of the artist are present in every country and are looking forward to the artist's next solo concert. Yegor Creed actively maintains his Instagram, the number of subscribers of the artist today has exceeded 14 million. On the artist's Youtube channel, each new hit gains more than a million views per day. Now it has finally become obvious to everyone that Yegor is a favorite of the public of all ages. For two years in a row, Yegor Creed performed in our capital performing his favorite hits, as well as new compositions, and again on September 26, Yegor Creed goes with a big concert to Tashkent in order to give unforgettable emotions to his fans again.