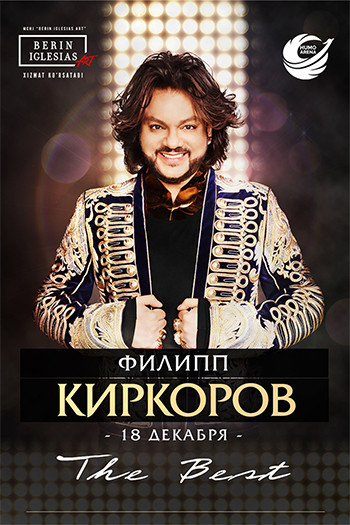 Philip Kirkorov is noted as king of pop and will delight the residents of Tashkent with a solo concert on the stage of Humo Arena.

On December 18, on the eve of the New Year, the king of Russian show business will present his solo show program called "The Best" on the stage of the Tashkent Ice Palace "Humo Arena". Viewers expect his best performances, conquered the charts of the CIS. Philip Kirkorov is a bright representative of Russian show business, whose creative potential is limitless. For over 30 years, the “King” of pop has been conquering the audiences' attention with musical hits known in Russia as well as the countries of the former Soviet Union, America, and Europe. One of the brightest events in the artist's work was a grand world-class show called “Me”. The project filled the Kremlin with the record amount of people. Philip still pleases his fans: last year, "Цвет настроения синий", "Ибица" и "Цвет настроения черный" were released, which had instantly become sensational hits in many countries. Furthermore, it should be noted that in March of this year, Kirkorov came to Tashkent with a performance at the grand opening of the new ice stadium "Humo Arena", performing his best hits.

Events can be visited by:
From 6+ age