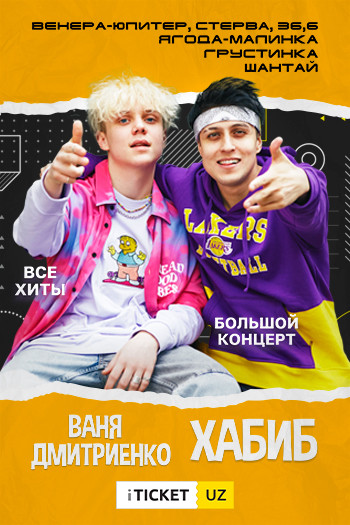 Charismatic 15-year-old artist who managed to try himself in cinema and music. Vanya began to gain his popularity after he began to upload covers of popular tracks to the network.

The track "Venera-Yupiter", released on January 1, 2021, burst into the top charts

music venues of the country and is still there. Venera-Yupiter is the most rotated track in the last 4 months.

Vanya became a guest of live broadcasts, such radio stations as: Europe Plus, LOVE

The tracks "Sterva" and "36.6" also occupy high positions in the top charts.

At the age of 15, the artist has already become a musical guest of the TV show "Vecherniy Urgant". Vanya received the Breakthrough of the Year award; at the "TopHit Music Awards"

Khabib Sharipov is an author and performer of his own songs, a nominee for the prestigious music awards of the Muz TV and Ru TV channels, the finalist of the Songs project on TNT, one of the most popular tiktokers with an audience of almost 9 million subscribers.

His songs take the first lines in charts on music channels and dance radio stations, and the video for the song "Yagoda-Malinka" has gained more than 200 million views on YOUTUBE.

The concert will feature well-known and beloved hits: "Yagoda Malinka", "Grustinka", "Shantai" and others, as well as new items that will surely find a response from the audience.

Events can be visited by:
From 0+ age
Free tickets:
Yes