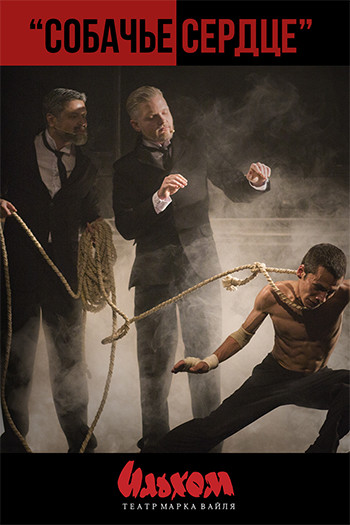 Heart of a Dog

An unprecedented creature will be born on stage of Tashkent’s Ilkhom Theatre of Mark Weil. In the presence of the audience, a new heart will begin to beat. The question is – does this heart belong to a dog or a human?
Today, 90 years after the creation of “Heart of a Dog”, the issues of violence against personality, and suppression of the human essence have only become more relevant.

In the same way that the monstrous homunculus, Polygraph Polygraphovich Sharikov replaces Sharik the dog, modern humans also lose their last bits of individuality.
Television, businessmen, politicians and cults fill our consciousness with their content, shaping our desires and habits. Independent decision-making has become an illusion for most. New half-gods and deities create their own Adams and Eves, ones who are ideal for selling forbidden fruit to.
The Sharik’s of today aren’t drugged with Professor Preobrajenskiy’s chloroform, but with the World Wide Web. The destruction of minds progresses, the cold winds of exclusion have consumed humanity, and those like Shvonder scramble for power.
Who can call themselves a completely free person today?