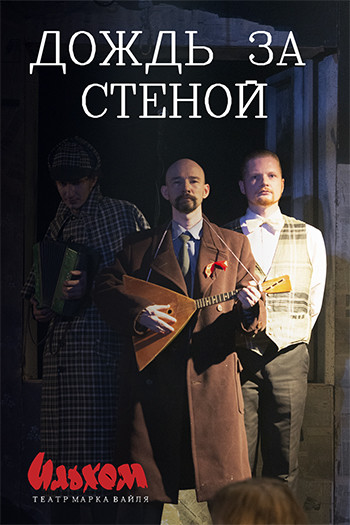 Rain behind the wall

The theater of Mark Weil “Ilkhom” with the support of the Swiss Cooperation Office in Uzbekistan, the Ministry of Culture of the Russian Federation and the Prince Claus Fund of the Netherlands present the premiere play Rain Behind The Wall (written by Yuri Klavdiev).

The play Rain Behind The Wall is a reflection of life on the street, and its distinguishing aggressive and radical speech. It’s black-and-white palette reminds you of a hallucinogenic nightmare. The philosophic dialogues in the play are saturated with profanity, but with no intent of a defeatist attitude, and that is the basic thing in understanding the meaning of Klavdiev’s text.

The play mystically combines a rigid and uncompromising ruthlessness of the modern world, spiced with gory details, and ultimate poetic attitude of the heroes living in this man made hell, where everyone is trying to survive by his/her own means. The characters of the play are people with difficult fates, who find themselves in a terrible situation, forcing them to interpret the theme of life, death, murder, freedom and hope.

Events can be visited by:
From 18 age