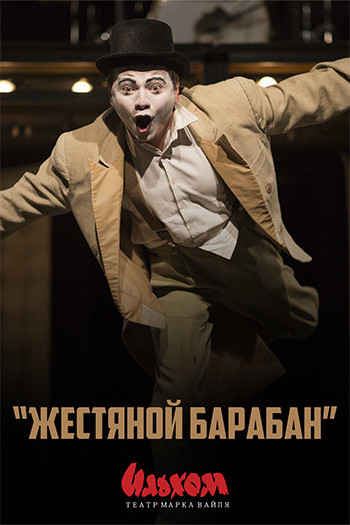 On May 26th and 27th, the Ilkhom Theatre will premiere “The Tin Drum” – a production based on Nobel prize laureaute, and German writer Günter Grass’ novel, which brought him world fame. The movie with the same title won numerous prizes, some of which include an Oscar, and a Palme d’Or. “The Tin Drum” is a diary of a young boy named Oscar who became disillusioned in the life of adults and decided he would refuse to grow up.

He sees the world from “below”, and this view allows him to see the world, and society as a whole in an unconventional, grotesque manner.
The absurd, unrealistic plot of the novel develops against the backdrop of concrete historical and geographical circumstances, and the solo of the main character with the drum unveils against the backdrop of Germany’s history in the 20th century. “The Tin Drum” has an unpredictable plot and is a tragicomedy which makes you laugh and cry at the same time, makes you sympathize with the characters, while at the same time making you feel repulsed with them.
This January, “The Tin Drum” was presented to the audience as a theatrical improvisation as part of the days of German cultu