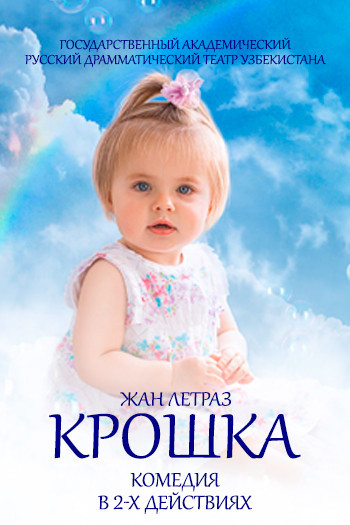 The State Academic Russian Drama Theater of Uzbekistan invites you, dear viewers, to the premiere of the comedy of the French playwright Jean Letraz "Baby". The most famous play by J. Letraz, written in 1935, was staged on many stages around the world.

The plot of "Tiny" is quite universal and could arise at any time - from the era of Moliere to the present day. This is a bright, sparkling play.

The Parisian soap-maker Edmond Fontange does not want to give his daughter to Christian for his secretary - an intelligent and honest, but not rich Augustin, and it doesn't matter that young people love each other. The father prepared his daughter for the groom of his business partner Pierre Gambier. But suddenly a three-month-old child appears in Fontange's house ...

Events can be visited by:
From 12 age