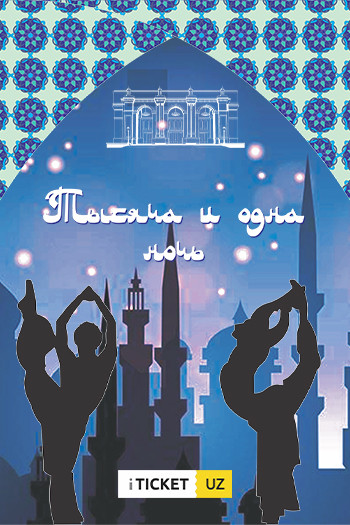 F. Amirov, "A Thousand and One Nights", ballet

An ancient legend tells that the powerful king Shahriyar once said goodbye to his beloved wife and went hunting. Returning unexpectedly to the palace, he finds his wife in the arms of a slave. He deals with his wife and comes to a terrible decision - to execute all the young women of his kingdom.

But Beauty and Wisdom come into the world of Evil and violence - this is Scheherazade. Love awakens in Shahriyar's hardened heart. But even this feeling does not soften the cruel heart, and Scheherazade must also die, like thousands of other women. A thousand and one nights Scheherazade tells the king of fairy tales ...

"About Sinbad the Sailor and the Bird of Happiness"

After a fierce storm, the brave navigator Sinbad is thrown onto a desert island. Having come to his senses, he notices the wonderful bird of Happiness, which illuminates the life of everyone who is lucky enough to meet her. But the Bird of Happiness is sad - it is pursued by the enemy - the evil bird Rukh. But the brave Sinbad boldly enters into a duel with the Rukh bird, defeats it and frees the Bird of Happiness from the evil power. From now on, her good light will illuminate both his life and the lives of other people with a warm heart and a pure soul.

"About the beautiful Budur and Aladdin"

East market. Suddenly, a thunderous fanfare is heard. Accompanied by guards, the beautiful Budur, the daughter of the local ruler, walks under a canopy. Under pain of death, it is forbidden for ordinary people to look at her. But Aladdin violated the ban and only one glance ignited love for her in his heart. Young Budur also does not hide her feelings. Suddenly, the insidious Magribian appears, who is eager to get Aladdin's magic lamp. Magribinian separates the lovers. But in a fight with a cunning and treacherous enemy, Aladdin prevails and the faithful Genie, who appeared from the lamp, returns his beloved Budur to him, and with her the Happiness of great beautiful Love.

About Ali Baba and the 40 Thieves

Ali Baba accidentally discovers the secret of the magical cave. Penetrates there and takes away a whole bag of gold looted by robbers. Having learned about this, the robbers pursue him, anticipating a quick reprisal. Ali Baba runs home. Faithful and loving wife Marjana is ready to help him. Disguised as a noble guest, the chieftain of the gang comes to Ali Baba's house to kill him. Having conceived a cunning plan, Marjana greets the guest cordially and affectionately. Dancing in front of him, she conquers the chieftain with her beauty and lulls his alertness. At a convenient moment, Ali Baba and Marjana deal with him. And again, good is stronger than evil, and the mind is higher than stupidity and swagger.

Even after listening to the beautiful tales of Scheherazade about the power of Love and Loyalty, Shahriyar is unable to calm his soul. Love and Jealousy are fighting in his heart. And he decides to go hunting again. Will Scheherazade remain faithful to him, or is it only in her beautiful tales that Good is stronger than Evil?

Returning from the hunt, they see Scheherazade surrounded by the heroes of her wonderful fairy tales. And faith in Love and Goodness from now on forever fills the heart of Shakhriyar ...