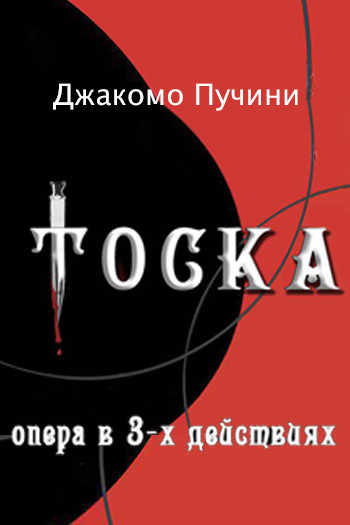 Sant'Andrea Church in Rome. Here there is a political prisoner who fled from the fortress, the former consul of the Roman Republic - Cesare Angelotti. It was here, in the chapel of his sister, the marquise Attavanti, that a dress was hidden for his escape and further shelter.

The artist Mario Cavaradossi writes in the church the image of the Magdalene. Her features are clearly reminiscent of the image of the marquise Attavanti, who often pray here. This fact of such similarity outraged Rizniciy, who considers it sacrilege to embody in the holy image the earthly beauty of a parishioner. And the artist himself is pleased with this similarity - he was really inspired by the image of a beautiful stranger. But his soul and heart belong to the beautiful singer Floria Tosca. After the departure of the Sacristy, Mario discovers with astonishment that Angelotti is hiding in the chapel. Feeding his friend, he promises him help and support. The arrival of the beautiful Floria Tosca causes the fugitive to hide again in the chapel. Floria hurries to see her beloved, but his unusual behavior causes her jealous suspicions, which are amplified by the similarity of Magdalene with the Marquise seen by her. Only the fervent assurances of Kavaradossi comfort her.

After Tosca's departure, the artist invites his friend to hide in his villa. In case of danger, he could take refuge in the secret niche of the well. A cannon shot is heard from the fortress - a sign that the escape was discovered. And Cavaradossi hurries to send Angelotti to the shelter.

In the cathedral there appear the chief of police Scarpia and his assistants, who are searching for the escaped prisoner. Discovered in the chapel, a fan with the initials of the marquise Attavanti and an empty basket from the food of the artist suggest Scarpia on the trail. Tosca returns to the church. Using the found fan and the similarity of the Magdalene with the marquise, Scarpia skillfully inflames a new outburst of jealousy in her. In indignation Floria goes to the villa of Cavaradossi. Scarpia sends three detectives following her.

The church is filled with people. The news came of the victory over Napoleon's troops. The solemn divine service begins. Tosca becomes an involuntary participant in a complex game, as a result of which Scarpia hopes not only to catch Angelotti and execute Mario, but also to subordinate to her attraction the very beautiful Floria - the subject of his secret passion.

Cabinet of Scarpia in the Palazzo Farnese. Embraced by his loving lust, he passes through the gendarme Sharon the invitation to Tosca to come to him urgently. Sleuth Spoletta reports that the fugitive was not found at the villa of the artist - but Mario himself was arrested and brought for interrogation. The artist categorically denies all accusations. Convicted of torture, he manages to tell Floria, who entered, about the need to remain silent.

Insinuating speeches, Scarpia tries to get from Tosca a secret about where the fugitive is hiding - but all is vain. However, the screams and groans of the lover coming from the dungeon deprive Tosca of composure - and she gives out the location of Angelotti. The policemen bring in the unconscious Cavaradossi. Recovering, he turns to Tosca – if she kept silence? Tosca answers in the affirmative. But the words of Scarpia, who orders to search the secret well in the villa, reveal the truth to him. In anger, Mario condemns the beloved. At this moment, Sharon brings news that the victory over Napoleon proved to be imaginary. And the army of Bonaparte, defeating the Austrian troops, is rapidly approaching Rome. The resurrected Cavaradossi rushes to Scarpia, but he is seized and taken to prison.

Scarpia offers Tosca an insidious deal. He will preserve Kavaradossi's life and freedom if Floria quenches his passion. In anger Tosca rejects this proposal. But the insidious Scarpia is invincible in the fit of his passion. In desperation, Floria offers prayer to the Creator, begging to give her strength and protection. Entered Spoletta reports that Angelotti shot himself at the time of his arrest, and the artist will be executed at dawn. And Tosca is forced to yield... Scarpia reports that the shooting of Mario will be made by blank shots - he gives instructions about this to Spolette. At the insistence of Tosca Scarpia writes for her a pass - with him, she, along with Mario, will leave Rome. At that moment, Floria quietly hides the dagger found on the table behind her back. And when the triumphant Scarpia wants to embrace her, she strikes him fiercely. With a pass in his hands, believing in a happy outcome, Tosca hurries to save his beloved...

The site on the tower of the Sant'Angelo castle is the place of execution of prisoners. They brought Cavaradossi here, who was only an hour before the execution. In the last moments of his life he writes a farewell letter to his beloved. Tosca suddenly appears. She tells about the impending shooting - and about the death of Scarpia. Feeling of death, Cavaradossi until the last minute supports Tosca in her bright hopes.

Soldiers line up before the convict. The volley rattles - and Mario falls. Tosca rushes to him, but perfidy of Scarpia is convinced too late. Cavaradossi is dead. The murder of Scarpia is discovered - and Tosca is pursued by Spoletta and Sharon. With an exclamation: "O Scarpia, God is our judge!" - Tosca rushes down from the parapet, ready to answer the Creator for the murder of a tyrant in the other world, and forever reunite with Mario...