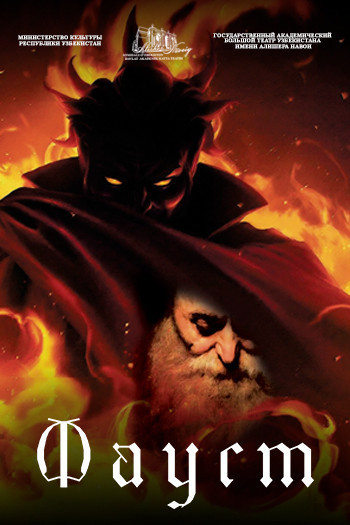 The action takes place in Germany in the Middle Ages.

secrets of the universe, but, realizing the sterility of the human mind, science, decided to part with life. The poison goblet trembles in his hands. He appeals to an evil spirit, cursing the earth, dreams and thirst for knowledge, cursing God ... Before the elder

Mephistopheles appears. Satan offers the old man wealth, glory, power. Only one thing can attract Faust - youth. Seduced by the beautiful image of Margarita, he enters into a deal with the devil and in exchange for youth sells his soul to him.

The area of ​​a small German town. Valentin, Margarita's brother leaves for the war, and his beloved sister is left all alone. Mephistopheles appears, evil and caustically ridiculing the power of the almighty gold, which condemns "the whole human race" to grief and bloodshed. Gradually everyone guesses that Satan is in front of them. Raising the cross-shaped handles of swords high, they drive away the devil.

Faust is looking forward to meeting Margarita. He is fascinated and upset: the beauty rejected him. Mephistopheles promises to help Faust win the girl's heart.

Faust and Mephistopheles in the garden. They hear Siebel's heartfelt confessions and see the bouquet intended for Margarita. Jealousy seizes Faust's heart. But Mephistopheles promises the companion success. He is sure that the young beauty will be seduced by the wonderful gifts of Faust.

Margarita is thrilled to meet a stranger. Near the house, she notices a bouquet of Siebel, and next - a mysterious box of Mephistopheles. Yielding to temptation, she tries on jewelry. Her neighbor Martha enters Margarita's garden. Mephistopheles brought Martha bad news: her husband died. A frivolous woman hints to Satan that she is ready to pair him. Faust and Margarita, left alone, are at the mercy of witchcraft.

In God's temple, Margarita tries to relieve her soul with prayer. But in response, hearing the terrible words of Mephistopheles: "You fell away from heaven and betrayed to hell!" - falls unconscious.

Valentine is returning from the war. He hurries to his beloved sister and learns that Faust brought shame and disgrace to their house. Valentine and Faust engage in a duel. Under the protection of Mephistopheles, Faustus inflicts a fatal blow on Valentine with his sword. Valentine curses Margarita and predicts her shameful death.

Margarita lost her mind: in a moment of despair, she killed her newborn child. Insane is declared a criminal and imprisoned. Execution awaits her. Refusing to flee with Faust, Margarita dies. But with her death, Faust's youth also ends. According to the agreement, the former doctor Faustus follows Mephistopheles.

A remote place in the mountains. Here on Walpurgis night, Mephistopheles brings Faust. He is surrounded by beautiful witches, bacchantes, satyrs, nymphs. The devil's Sabbath begins.