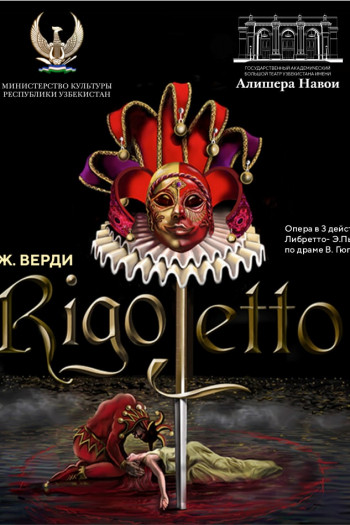 The frivolous Duke Mantuanski takes care of the Countess Cheprano at the ball. The court jester Rigoletto mocks her jealous husband. There is a sharp clash between the clown and Count Cheprano. The courtiers keep the Count: the fool can be avenged otherwise - Rigoletto has a charming lover, whom he carefully protects from prying eyes. Conspiracy against Rigoletto is being plotted.

The old Count Monterone enters. He wants revenge - his daughter disgraced by the duke. Rigoletto laughs mockingly and mimics the old man's anger. The arrested Monterone curses the duke and the jester. Rigoletto is crushed by the terrible words of the curse.

In a small house there lives the one who is considered the beloved of Rigoletto - his beloved daughter Gilda.

Gilda repents that she hid from father her meeting with a handsome young man who called himself a poor student and led her to the church.

The disguised duke, a new acquaintance of Gilda, secretly enters the garden and assures the girl of love. The maid, to whom the duke handed the purse with money, warns the lovers of danger. The Duke disappears.

A group of courtiers, led by Count Cheprano, are approaching the house, all wearing masks. Offering Rigoletto to take part in the kidnapping of Countess Cheprano, they deceive him and in fact kidnap Gilda.

Rigoletto falls unconscious when he learns that his daughter was kidnapped instead of the Countess Cheprano.

The Duke is dejected by the mysterious disappearance of Gilda. The courtiers are amused by the abduction of Rigoletto's "beloved". She is here - in the palace. It becomes clear to the Duke that this is Gilda. He hurries to her.

Depressed by grief, Rigoletto implores the courtiers to say where the girl stolen by them. He's bullied.

Gilda runs out from the duke's room. In grief, Rigoletto listens to her mournful tale. The fool sees how the guard leads count Monterone to prison. Rigoletto vows to avenge the duke for both Gilda and the daughter of the count.

Tavern of Sparafuchillo and his sister - the beauty Maddalena, to whom the duke is due to visit. Knowing this, Rigoletto brought Gilda here. Gilda hears the duke swearing Maddalena in love and promises to marry her. Rigoletto persuades her daughter to change into a man's dress and flee to Verona. He will remain here to take revenge on the duke.

Rigoletto conspired with Sparafucillo about the murder of his guest. Maddalena begs his brother to deceive Rigoletto and kill the first one to enter the tavern. Gilda hears this conversation and decides to sacrifice his life to save his beloved. In a man's dress she enters the tavern, and Sparafuchillo, taking her for a boy, strikes her with a knife, and passes Rigoletto a sack with a corpse.

Rigoletto rejoices: he has avenged! The clown carries a sack to the river, and he hears the duke's song. Is the duke alive?!

Rigoletto unties the sack in horror. Fatally wounded Gilda is before him. She dies in her father's arms.