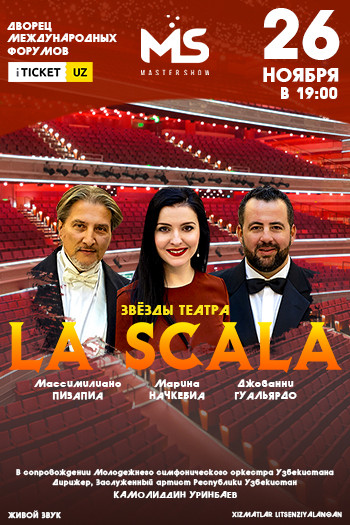 Stars of the La Scala Theater

Stars of the famous Italian theater "La Scala", accompanied by a large symphony orchestra on the main stage of the country!

The Italian baritone Giovanni GUALLYARDO has been a public favorite and famous performer for many years. He is a soloist at the La Scala Theater in Milan, the Theaterdell'opera in Rome, the Theater of Massimo Palermo, the Teatro Carlo Felice in Genoa, the Bellini Theater in Cagliari, the Theater of Catania, the Teatro Filarmonico Verona, the Municipal Theater of Piacenza, the theater in Parma, the Puccini Torrellago Festival , National Center for the Performing Arts in Beijing. He is touring with influential conductors Bruno Campanella, Daniel Harding, Danieloren, Hubert Sudan and Myung-Woon Chung.

Give yourself and your loved ones real pleasure.

Only for you stars will perform who applaud in all the leading theaters of the world!

We have prepared a unique program that will not leave indifferent connoisseurs of high art.

We are waiting for you at the most ambitious event of this year!

Hurry to get tickets, the number of seats is limited!