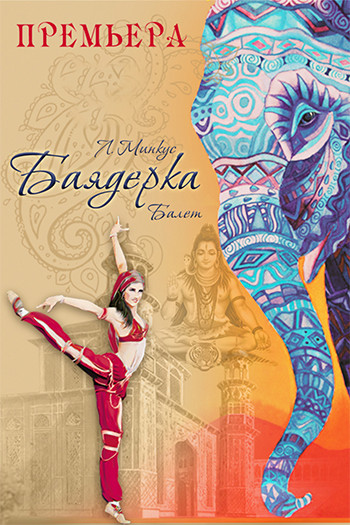 Noble youth are returning from a tiger hunt. The famous warrior Solor instructs the fakir Magedaveya to tell the bayadere Nikiya that he will wait for her at night at the temple.

The solemn appearance of the Great Brahmin, priests, bayadere, and servants of the temple opens the feast of fire worship. The dance of the beautiful Nikiya is the culmination of the celebration.

The great Brahmin, having forgotten about his holy dignity and the vow of celibacy associated with it, confesses to Nikia in love. He promises her all the riches of India – everything she wants. But Nikiya in horror pushes him away.

At night, Nikiya secretly goes on a date to Solor. The Great Brahmin turns out to be a witness of ardent explanations, and he vows revenge on those in love.

Raja Dugmanta announces to her daughter Gamzatti that she will become the wife of the best and bravest warrior – Solor. Gamzatti is happy, but Solor is thrown into confusion: he does not dare to refuse high honor, but he loves Nikiya and gave her an oath of loyalty at the sacred fire.

The youth gathered in the palace to greet Solor and Gamzatti. The Great Brahmin also appears, he tells the Raja about the love of Nikiya and Solor. Dugmanta is angry, but does not change the decision: Solor will be the husband of his daughter, and the bayadere must die. The Brahmin did not expect such an outcome, and he threatens the Raja with the punishment of the gods for the death of the bayadere, but Dugmanta is relentless.

Gamzatti overheard this conversation. She orders a slave to bring Nikiya and, as if by chance, shows her the portrait of her fiancé. Nikiya is in despair, she protests: Solor loves only her and will belong only to her. Gamzatti demands, prays to Nikiya to give up Solor, but the bayadere is ready to die rather than part with her beloved. In anger, Nikiya puts a dagger over her rival, and only the maid rescues Gamzatti from certain death.

Square in front of the Raja Palace. It is wedding of Gamzatti and Solor.

They bring a basket of flowers to dancing Nikiya, and a snake creeps out from which and mortally stings the bayadere. This is Gamzatti's revenge.

The great Brahmin offers Nikiya an antidote. However, Nikiya remains true to her love and, dying, reminds the beloved of his oath.

Solor is inconsolable. He is tormented by remorse. Magedaveya offers Solor a hookah and tries to distract the young man from heavy thoughts with his dance. Solor falls asleep. In the dream, the golden god comes to him who opens the door for Solor to the kingdom of shadows, where he sees his beloved.

In front of Solor from the darkness appear the shadows of the dead. In a long line they descend from the mountain ledges. He sees Nikiya among them. She calls him...